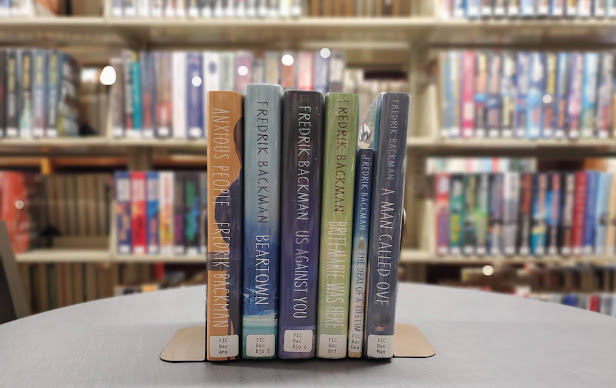 Fredrik Backman has made a name for himself as the king of quirky contemporary fiction.

He writes his books with small-town charm and unexpected backstories, from the perspectives of characters that normally wouldn't take center stage.

If you like to read modern fiction and are looking for a heart-warming book with a touch of humor to pick up next, consider checking one of these out!

Backman's first novel, "A Man Called Ove," tells the story of a curmudgeonly man known by the town as "the bitter neighbor from hell." But when an unexpected friendship blossoms between Ove and the chatty young family next door, the truth behind Ove's bitter exterior begins to come to light. This book became a movie in 2016, starring Tom Hanks. Find it in our catalog here!
"Beartown" and its sequel, "Us Against You," is a last-chance comeback story of a small town. Its last hope of staying relevant lay in the hands of its junior ice hockey team and its journey nationals.
With six of Backman's fiction titles in our collection, you're sure to find one to love.

Click on any photo to be redirected to our online catalog, where you can learn more about the titles and place holds!

Or, if you're looking for a new nonfiction read, Backman has a collection of essays geared toward anyone looking for a bit of insight on the world. He draws from his experiences on life and fatherhood using his signature humor and optimistic outlook on the world. Backman chose to balance humor and insight by offering a variety of life lessons, including how to find the team you belong to, how to beat Monkey Island 3, why parents might hold their child's hand a bit too tight, and how starting a band is crucial to maintaining friendships, as well as offering advice to his aging son and his own experiences falling in love with a woman who is his opposite.
at September 15, 2021 No comments:

September is Better Breakfast Month, so it’s the perfect time to add new morning recipes into your repertoire!

The library has cookbooks for all occasions, including several dedicated to breakfast recipes. Whether you’re a parent looking for easy before-school recipes, or someone just looking to try out some new morning dishes, try out one of the cookbooks below or stop by to browse our selection.

Click on any of the photos to be redirected to our online catalog.

If you liked “To Kill a Mockingbird” by Harper Lee…

"To Kill a Mockingbird" is a staple in high school classrooms, but it can be even better to reread as an adult. There are plenty of books that deal with issues of racism and social injustice, but few match up to this classic.

Below are three books that have come out in the last decade that have similar themes and atmospheres to Lee's beloved classic. If you loved "To Kill a Mockingbird," you should try these!

This book also deals with sensitive issues like race in the south, but this time with the rare Blue People of Kentucky. The story follows 19-year-old Cussy Carter, the last female of the Blue People line, as she follows her dream of becoming a librarian for the Pack Horse Library Project of Kentucky. She meets kind book lovers and dangerous racists along her way, eventually finding a bit of illegal romance along the way. You can also check it out as an audiobook!

“News of the World” by Paulette Jiles

Set in the aftermath of the Civil War, an aging news reader agrees to transport a young girl back to her family. Captain Jefferson Kyle Kidd travels around northern Texas sharing news from around the world when he agrees to transport 10-year-old Johanna, who was taken captive by a Native American tribe that raised her as one of their own. What follows is a journey of moral complexity, an unlikely friendship, and the true meaning of family. You can also check out the Playaway or the 2020 film.

“The Sun Does Shine” by Anthony Ray Hinton

If you’re looking for a true depiction of racial injustice, this memoir follows the story of a man who was wrongly put on death row for 30 years, charged with two counts of murder. He spent his time in prison sharing his faith and embracing the situation with positivity and the hope the wrong would be righted. Civil Rights Attorney Bryan Stevenson helped Hinton prove his innocence in 2015. Stevenson also released his own memoir, "Just Mercy," which became a movie in 2019.

Fredrik Backman has made a name for himself as the king of quirky contemporary fiction. He writes his books with small-town charm and unex...